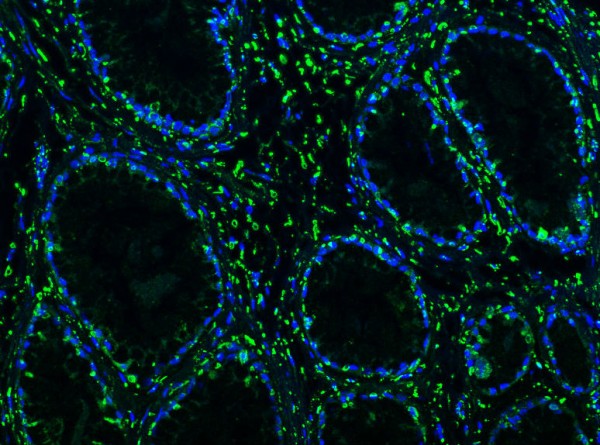 A deadly and newly-identified virus glows green in a fluorescent-stained image of an infected boa constrictor kidney. Credit: Mark Stenglein.

Sometimes, though not very often, a science story starts off as a love story. And it’s likely that no other tale of scientific discovery, particularly one that touches on some of the most frightening diseases on the planet, begins with one woman’s enduring love for a boa constrictor named Larry.

Yet an attempt to save Larry set in motion a series of events, many outlandishly serendipitous, that allowed scientists to hunt down a virus new to science. The virus is apparently the culprit for an infamous and deadly scourge of captive snakes called inclusion body disease, or IBD.

The newfound pathogen is also related to viruses that cause nasty diseases in humans called viral hemorrhagic fevers. The most famous of these is Ebola.

When a California woman named Taryn Hook brought Larry — all 7 feet (2 meters) of him — to the vet a few years ago, she never imagined that the trip would one day lead to such a remarkable discovery, which was announced today (Aug. 14) in the journal mBio. [Read Larry the Snake’s Story]

IBD afflicts pythons and boa constrictors, causing a host of strange symptoms. The snakes tie themselves in knots, they projectile vomit and engage in an eerie behavior called stargazing; the snakes raise their heads over and over, stare into thin air, and sway drunkenly from side to side.

Biopsies from animals with the disease show their cells filled up with globules of proteins called inclusions, which may be responsible for the odd behaviors.

There’s no cure for the disease. It moves swiftly in pythons, and can progress slowly in boa constrictors, but it is always fatal. And it’s infectious, moving from snake to snake, though the mechanism of transmission isn’t entirely clear. If one animal in a collection gets IBD, typically all the animals are euthanized.

Taryn Hook with Larry, a beloved boa constrictor whose affliction prompted the lifelong keeper of reptiles to get in touch with a researcher who hunts down viruses. Credit: Larry Taormina, Ph.D

Blood tests had suggested Larry, a Dumeril’s boa constrictor, might have IBD. Wanting to know what could be done to save the beloved snake, Hook contacted Joseph DeRisi at the University of California, San Francisco, a virologist known for his work deciphering another mysterious virus, this one affecting macaws and parrots.

Her plea for help led DeRisi’s lab to take on IBD. The scientists put out a call for samples of diseased and nondiseased snakes. Perhaps luckily, the Steinhart Aquarium at the California Academy of Sciences, just a few miles away, had a sudden outbreak of IBD.

Many snakes, both with and without IBD, had to be killed, providing the lab with plenty of freshly preserved tissue to start their investigation.

Postdoctoral researcher Mark Stenglein, the research’s lead author, rifled through the genes of the dead snakes and soon had millions and millions of sequences. But to sort out which sequence might belong to any suspect viruses, he needed the ultimate genetic blueprint — the boa constrictor genome, which had never been put together.

Without the assembled genome, it would be extremely difficult to tell which sequences belonged to viruses that cause disease, and which were simply vestiges of viruses now rendered harmless by the rigors of time and evolution.

“They’re the fossils of old infections,” Stenglein said. “They’re in every genome. So if we saw those, they might have been confusing to us.”

Yet fate smiled upon the effort yet again. A contest called Assemblathon 2 — which pits different groups against each another in a kind of genome-off — was getting under way. They chose to take a stab at sequencing the red-tailed boa constrictor’s genome, and Stenglein got his hands on the results.

Yet to study a new virus, you must make more of it — which requires a host cell that will allow the virus to replicate itself. And here, Stenglein ran into yet another roadblock. He tried to grow the new virus in various animal cell lines — monkey cells, iguana cells, turtle cells, the cells of a viper — yet nothing worked. He needed a boa constrictor cell line. And since there was no existing boa constrictor cell line, he needed to start one himself.

“To do that, you need organs — tissue from the species,” Stenglein said.  “And as you might imagine, you can’t go buy boa constrictor kidneys at the supermarket.”

Kismet struck again, though this time the coincidence wasn’t a happy one.

Right around that time, Juliet died, and Sanders, knowing Stenglein needed boa constrictor organs, put his pet of 20 years in the refrigerator and sent him an email.

The next day, the two men performed a necropsy, peeling back her skin and removing pieces of Juliet’s organs, brain, and other tissue.

Stenglein prepped each sample, finely mincing the organs with a scalpel, putting them in petri dishes filled with a growth medium — and waited.

“Most of the organs I tried, all the cells died,” he said. But Juliet’s kidneys didn’t die. In fact, the cells kept on growing, allowing Stenglein to grow more of the virus, and discover more of its secrets — which turned out to be a little bit scary.

Upon closer examination, it turns out the newfound virus has some dangerous relations. It looks like a mash-up of two different viruses that can jump from animals to humans, and cause diseases such as Lassa fever and Ebola.

Although the newfound virus shares qualities of both, it most closely resembles an arenavirus. Until now, arenaviruses had been seen only in mammals — specifically, in rodents. And although the mice and rats that carry the arenaviruses are unaffected, they pass the virus on to humans through their urine or feces, causing diseases such as Lassa fever — a disease that kills some 5,000 people in West Africa each year, according to the World Health Organization — and Bolivian hemorrhagic fever, among others.

Some of these diseases can pass from person to person, once the virus jumps from animal to human.

Despite the newfound virus’s menacing cousins, Stenglein and DeRisi emphasized that snake owners have no reason to worry. There’s no evidence that the snake virus can affect humans. The fact that it refused to grow in any cells but a boa constrictor’s suggests there is a strong species barrier that protects humans.

Yet is it possible the virus could be passed to humans? “The bottom line is, I don’t know,” DeRisi said. “That is the fairest answer. I don’t think it’s that likely.”

“There’s not a big epidemic of pet owners with crazy fevers and unexplained deaths. I think people would notice that,” Stenglein said.

The scientists still have work ahead: To confirm IBD as the cause of the snake sickness, they must still inject a healthy snake with the virus and show that IBD develops. That’s a project in the works. DeRisi said next on his list is to see if snakes in the wild are affected by IBD.

In addition, it’s still unknown how snakes get the disease in the first place. Mites that feed on snake blood have been linked to IBD, but DeRisi and Stenglein said it’s very interesting that the newfound virus so closely resembles a virus known to lurk in mice and rats — favored snacks for snakes.

The discovery of the virus may lead to a fast diagnostic test for IBD, which would allow institutions to identify and kill any infected snakes before they pass on the disease.

Thanks to Juliet’s kidney cells, which continue to grow, the lab can continue to replicate the virus, and continue the search for answers. (Juliet herself was given a dignified send-off. “She’s buried in the backyard,” Sanders said.)

“There are a lot of evolutionary and genetic mysteries wrapped up in this research,” DeRisi said. “This may have opened the door to whole new world of arenaviruses and hemorrhagic fevers.”

Larry, the snake that started it all, apparently does not have IBD. He is, in fact, still alive, although Hook has had to put down two other pet snakes that got sick with IBD.

And although Larry still gets sick a lot, at 15 years old, “he’s a wonderful animal,” Hook said. He’s an integral part of the family, “just like someone’s dog or cat.”